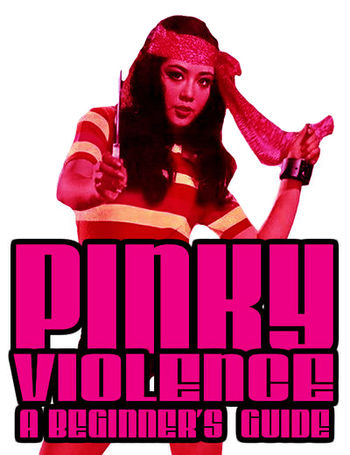 What is Pinky Violence? There is no universally agreed on definition for the term, and you will get different answers depending on who you ask. However, for the lack of a better definition we can cite the title of the ultimate book on the subject; J-Taro Sugisaku and Takeshi Uechi’s ’Pinky Violence – Toei’s Bad Girl Films’. In layman’s terms this means “sexed up, bad girl action films” by the Toei studios. Generally the genre is also considered to include Teruo Ishii’s Tokugawa/Torture epics from the late 60’s, which put the genre on the world map. Pinky Violence flourished for the next 10 years and came to its end in the late 70’s.

I usually recommend Sex & Fury for beginners because it’s the film that originally made me a pinky violence fan. It is directed by Norifumi Suzuki, one of Japan’s most remarkable directors (his achievements in mainstream cinema are even more notable than his amazing pink career) and starring one of the genre’s two uncrowned queens; Reiko Ike. Basically the film is a modern sexploitation version of Suzuki’s own, 60’s and early 70’s yakuza films (such as Red Peony Gambler). But the style and technical brilliance is amazing. The Pinky Violence genre produced some of best looking grindhouse films of all time (not far behind Argento’s most stylish films) and Sex & Fury is a prime example. The action is also terrific, and the film co-stars the swedish genre import Christina Lindberg.

Teruo Ishii, Suzuki’s pink rival and the man who could perhaps be considered the father of the genre, directed the sequel, Female Yakuza Tale. The film is not quite as masterful as Sex and Fury, but it’s even wilder in terms of content. The final massacre is something you have to see yourself to believe. Some fans consider Female Yakuza Tale better than Sex & Fury, including the production company Toei, who only released Female Yakuza Tale on VHS back in the day (ironically, now that we’ve entered the DVD age, only Sex & Fury has received a release in Japan).

Another easy pick for a beginner is Panik House’s Pinky Violence Box Set, which is a sort of ’best of’ collection, as the company picked films from three different series. The fourth film in the box set, Criminal Woman, is a stand alone feature that did not receive sequels, although it was originally intended as the first film in a series. The films are all excellent, but slightly different in style.

As for missing films, Toei will be releasing Sukeban 1-2 (and assumably 3-7 soon after) and Delinquent Girl Boss 1-4 on dvd this August (2008). These Japanese dvds will be remasterd but not subtitled in English. The missing Terrifying Girls’ High school films are not available anywhere.

That should be enough for your pinky violence warm up, next comes the acid rain. Zero Woman: Red Handcuffs is one of the toughest and most violent japanese crime films from the 70’s. It’s also perhaps Miki Sugimoto’s greatest stand alone moment (she and Reiko Ike did several films together, although they were basically competitors). The soundtrack by Shunsuke Kikuchi, with theme song sung by miss Sugimoto herself, is also terrific. Many fans consider Red Handcuffs one of the very best pinky violence movies.

Another film that belongs to the same quality bunch is Norifumi Suzuki’s School of The Holy Beast. It is my favourite Nunsploitation film of all time… although I should mention it’s the only nunsploitation I have ever seen. But, it would be a pretty safe bet to say this is one of the best no matter how many you’ve seen. Truly a beautifully shot movie, with Yumi Takigawa playing the lead role. Also, you will notice Fumio Watanabe in a small supporting role as the evil priest.

Watanabe is the actor that you (will) know as the sadistic warden in the first two Female Prisoner Scorpion films. The whole series is excellent, but the first two especially deserve to be mentioned on any ’best of’ list. Part one, knows as Female Prisoner 701: Scorpion, is pretty jaw dropping in it’s combination of WIP exploitation, surrealism and amazing technical brilliancy and its eye for details. Nevetheless, the sequel, Jailhouse 41, is even more mind blowing.

The third film, Beast Stable, takes an U-turn into character drama, and as weird as it sounds, the film is a total success. Part 4, Grudge Song, on the other hand is a crime drama, again highly impressive. The legendary leading lady Meiko Kaji dropped out from the series after that, but the studio produced two more Female Prisoner Scorpion films in 1976 and 1977. New Female Prisoner Scorpion #701 is very much worth seeing. The ending is so good it’s gonna make any fan wet their pants. The second New film, Tokushu-bo X, is also good, but the new leading lady Yoko Natsuki is no match for Meiko Kaji (1-4) or Yumi Takigawa (5). Parts 1-4 are available on R1 (you can get Jailhouse 41 also from the UK as the R1 release is out of print), but the New Female Prisoner films have only been released in France in the Sasori box set (with French subtitles).

5 films for the beginner